The market was volatile last week and it closed at a loss of 0.9% which could have been caused due to continuous net selling of FIIs in the Indian market. Energy prices are increasing and the sector gained the most at 6.8% last week. Read our write up to understand more about the Gas sector and which companies are expected to perform well in short term v/s long term.

Among all the sectors which lost last week, the IT sector was down significantly by 4.1%. This is due to dissatisfactory results announced by IT companies. Know more about the current dynamics in the industry here. 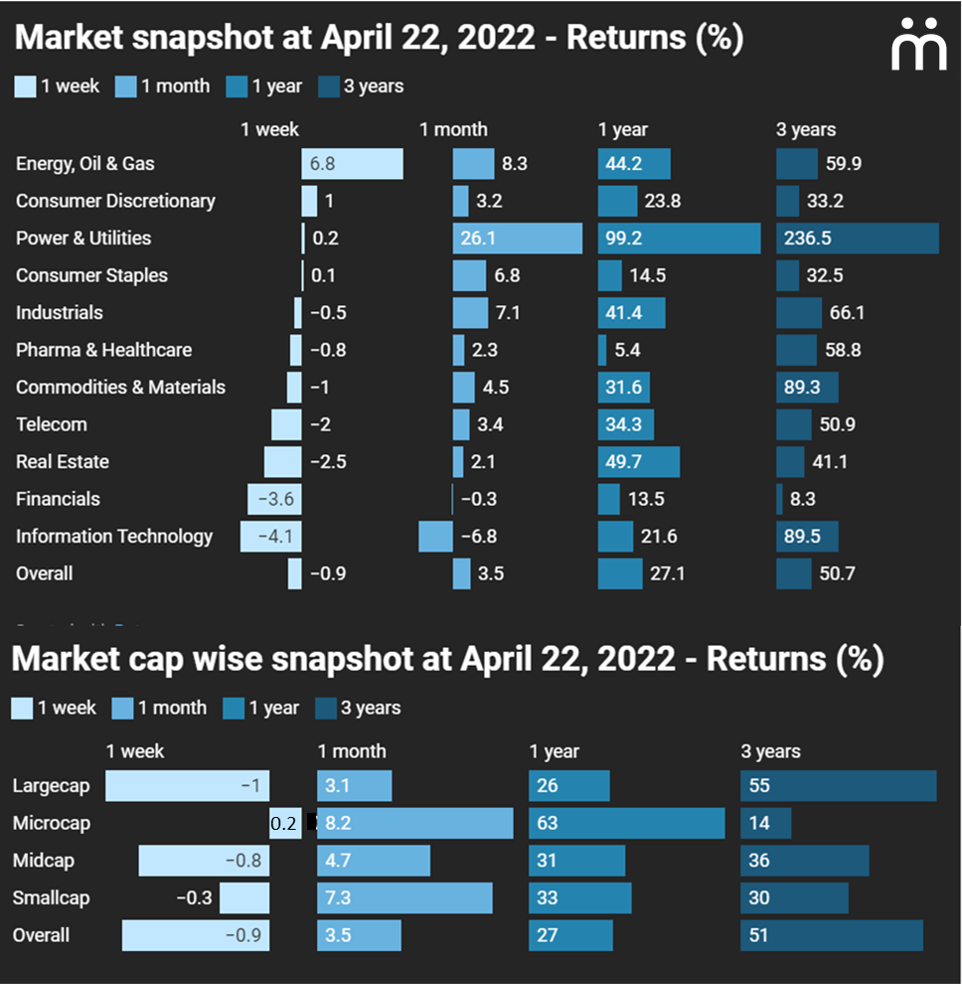 We have long heard phrases like “India will become next China” or “India ready to become 3rd largest economic power”. But now we are finally seeing some good groundwork done and implementation happening in India.

These days, this is India at every opportunity it gets🏆:

Recently India achieved its export target of ~$670 Bn (including services) and has been making the best out of every opportunity it gets. In the past few days, India has signed very important FTAs, of which, major 2 are explained below:

(i) Free trade agreement (FTA) with the UK

UK’s prime minister- Boris Johnson visited India, especially for negotiations of Free trade agreement with India. An interim pact has been implemented which includes 65% of total good exports & 40% of the export of services (Good exports are expected to reach ~90% in the final agreement).

By signing this trade, India, and UK aim to double their bilateral trade by 2030 & have confirmed more than £1 Bn in new investments & export deals.

Which Industries to benefit?

Why was this necessary?

Uk used to bear ~19% of tariffs while exporting to India so this FTA will The UK wants to reduce its dependence on Europe and India is also way too dependent on China for raw materials for many industries such as electronics, and pharmaceuticals (APIs) & industrial goods.

Now given fresh supply chain issues due to the China lockdown and the Russia-Ukraine war, not just Australia or India, all the countries want to reduce their dependence on China.

Under the agreement with Australia, Canberra (capital of Australia) would offer zero duty access to India for about 96.4% of exports, which earlier had 4-5% customs duty. Similarly, India will provide zero-duty access for 85% of exports from Australia.

What this means: Governments are letting go of tax collection to let exports and trade flourish

How will it benefit?

The bilateral trade of goods & services is expected to increase to $50 billion in five years from about $27.5 billion in 2021.

Which Industries to benefit?

One-third of Australia’s trade used to happen with China making it the largest trade partner for Australia. But there were increasing economic tensions with China.  Like China banned imports of Australian meat and coal & imposed high tariffs on wine and barley in FY21.  This impacted Australian exports triggering the decision for Australia to diversify.

✔️ Scheduled commercial banks (SCBs) are allowed to issue credit cards either independently or in arrangement with an NBFC if the entity’s net owned fund is Rs 100crs (earlier they were allowed to only co-brand with banks issuing it). This development will definitely help in driving the credit ecosystem in India.

✔️ Borosil Renewables hit its all-time high price, especially on the news of the board meeting regarding the fundraising through the preferential issue on a private placement basis. Also, the company’s share price is up ~20x in the last 2 years. I wrote on “What is driving up Borosil Renewables” 6 months back. Check out the same here.

✔️Sri Lanka has defaulted on $51 Bn debt and the country started faltering on payments since covid. The steep surge in crude oil prices during the Russia-Ukraine war has led its situation to deteriorate so much that it ran out of the foreign exchange reserves to buy fuel which is leading to power cuts in the country.

India found an opportunity in disguise in this distressed situation: Sri Lanka is the major exporter of textiles & tea to the world; making up ~50% and ~17% of the total exports. But due to supply issues, other countries, especially, India is well poised to capture this opportunity and provide tea and textiles to the world.

The Sri Lankan crisis can open up newer markets like the US, China, Iraq, Turkey & Canada for India. Indian players, especially, in Tamil Nadu have already started receiving orders from Latin America, the UAE, and Australia.

4.1 An article by Forbes India on “Intuitive investing”

4.2 A write-up on giving a very interesting perspective on how “Growth traps” are new wealth destroyers

4.3 New definition of Alpha clearing out what does outperformance really mean