Welcome to the 16th edition (12th on blog) of the weekly newsletter. We have been publishing these weeklies every weekend over the last few months. If you are finding these helpful, please spread a word about us by sharing with your friends and work network. Let’s get started.

1. Market snapshot – the tides are turning?

The markets have been indicating signs of reversals or allocation shift in the last 2 weeks. Last week, the flows shifted safer havens in Consumer staples (household consumption items) which was up 3.8%, while the markets were down over 1%. Other gainers include IT and Power, while all other indices closed in red. Interestingly, IT has been the best performing sector last month, which coincides with the crackdown of China on its Tech economy. 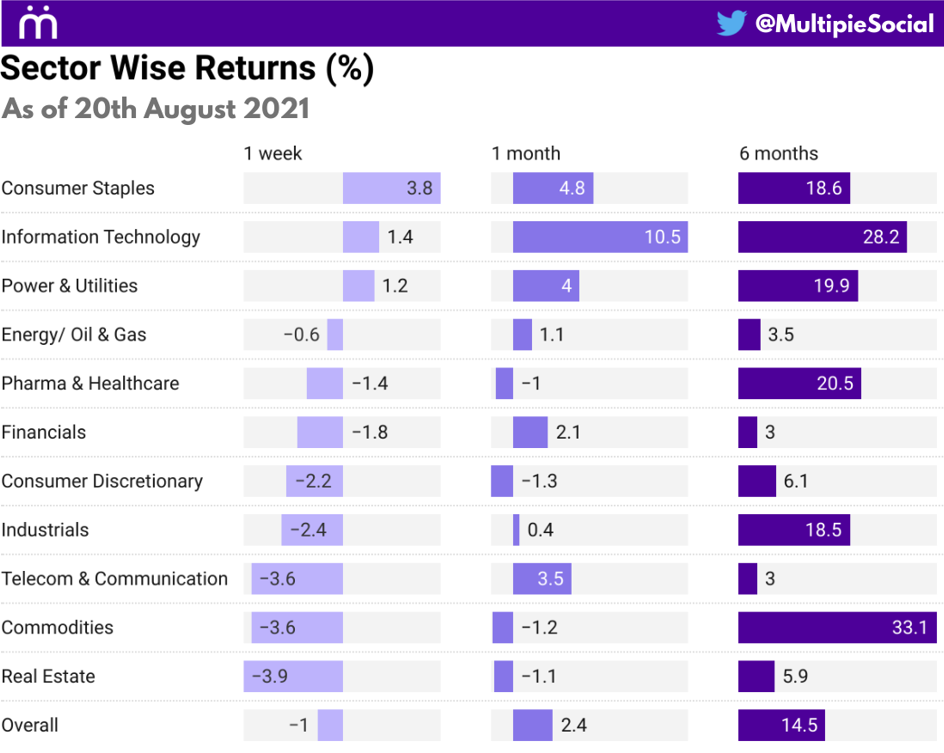 Some shift is visible in the flows by market cap as well with large cap stocks outperforming small and microcap companies over both the last week and last month as you can see below:

This week, we hosted Swanand Kelkar, former Managing Director of Morgan Stanley India Invesments on our podcast (listen here or watch here). We share select extracts below (quoted from the talk), which should be helpful for any investor. We will also share the full transcript over the weekend.

1. How understanding macro can help one in investing – HUL versus L&T:

The first decade of this millennium from 2000 to 2010, it was all about Larsen and Toubro. From 2003 till 2009, Larsen had this fabulous run, some 6-7x and HUL was flat. A lot of people have forgotten the fact that it was called Unilever’s lost decade (reminds us of ITC memes). And the basic underlying macro reason at the broadest level was the fact that the economy was driven by the supply side, by capital expenditure, and by the creation of new capacities. It was an investment-led economy and consumption as a driver was much more subdued.

Come to 2009 and you had this one big mega fiscal stimulus after the financial meltdown and these drivers reversed. If you look at 2010 to 2020, it’s a lost decade for L&T. Whereas Hindustan Unilever is now up multi-fold. Because the fiscal stimulus was a more consumer-oriented fiscal stimulus – they put money into the hands of the consumer, they went out and bought stuff, right.

I’m just giving a very broad example, if you just made this macro regime shift call, you could move from Larsen to Unilever on time, and I probably feel that that might be reversing again. Those drivers of the economy might be changing one more time. So as a macro investor, if you can figure out that, okay, I feel the next five years, this is going to be the predominant driver of growth, I think then you can orient your stock picking in that direction. But there is no getting out of stock picking. My favorite analogy for this is the macro regime is like the pitch on which you play with it, right. You might read the pitch well, but at the end of the day, you still have to make runs.

On a long-term basis, there are 3 sources of alpha and when we say alpha, it means superior return versus the market:

..Investors tend to spend 80% of their time trying to out-know each other. Right, we have an obsession with ‘khabar’, we have an obsession with knowing one bit of information more than the next guy and 80% of the time gets spent there. Maybe 15% gets spent in out analyzing – try and make cross-industry linkages, try to look at data, try to zoom out a bit. And balance, if any on our behavior.

But if you look at just long-term investing outcomes, the numbers are exactly the reverse: 80% of your returns on long term (10 years and more) are about out-behaving, from not losing your nerve at market bottoms. Maybe 15% comes from our analysis and one in a while, only 5% from out-knowing.

3. Concentration versus diversification in portfolio:

My view is that I’m not somebody who likes to spray and pray, right, I mean, I like concentrated portfolios, wherein, at least I have a semblance of control over what I found, there are no blind spots in the portfolio. I have never liked 1-1.5% portfolio allocation stocks. What are you even doing here? Let’s say this stock doubles in three years, it’s gonna add only 1%. If you’re so confident you have done all the hard work and you think that this stock deserves a place in the portfolio, it would rather be 2.5 to 3%, if not more.

So personally, the first serious investment I made was in 2011, in a company called Cholamandalam Investments. It was then a turnaround company. The book value hadn’t grown for three years in a row. They were licking their wounds. I have held it for almost 10 years today and I bought it in August 2011. Professionally as I said, HDFC Bank was the longest holding. We had Eicher Motors for a fairly long time. We bought Eicher Motors in 2009 and we held it till 2020. It did well for us for a fairly long time.

If you are somebody who’s not going to devote a lot of time figuring out financial markets, you don’t have the time or inclination to figure out stocks or doing basic mutual fund research, I think passive investment is the recipe – broadly mimicking market returns, not paying too many fees for it. Over a long period, Indian market has returned somewhere between 10 to 15%, in nominal terms, and that is handy to beat fixed income returns. Not on short time frames, you have to at least give it five years or more than that. If you’re just allocating money to different asset classes, I think passive is the best way to go.

If you have some more time, some more inclination, some more wherewithal, knowledge, whatever, then you can start looking at active management through an intermediary, like a mutual fund, a PMS, an AIF and try to get some more market return. 10 to 15%, is what the market is offering you, you’re trying for an additional 2-3% by giving money to somebody who’s doing well.

If you’re consumed by markets, and that’s all you want to do, right? If markets are your bread, your life, then you should be doing personal investing directly, you should commit a significant amount of your time and effort toward learning the market. Then you can invest directly in stocks and try to understand rather than doing flip stocks or anything of that sort. In India, every individual should have some equity exposure as for fairly long periods even adjusted for volatility, it gives a better return than fixed income.

The best time to invest in an asset-heavy model is at the turn of the cycle. It’s very simple – you already have assets in place which are utilized at a fairly low level, as things turn utilizations go up, a lot of the incremental revenue becomes your profit which makes your profit multiply. Think about it like a hotel, it has got 100 rooms, and during the COVID-19 pandemic, only five are occupied. If you are convinced that the occupancy is going to rise from 10 to 90 as things open up & start getting normalized, I think that is a time to invest in any kind of asset heavy model. It can be multiplex, hotels, manufacturing, cement companies, steel companies, etc. So that’s how that cycle of asset-heavy v/s asset-light plays. You want to be sure that you exit at the right time because when things are going down, they go down with equal speed.

I will look at asset-heavy models right now because it will be foolish not to bet on normalization of some sort. The framework or the thought process that I have over there is, assuming the pre COVID demand levels for a certain commodity or sector were 100. If it was a COVID beneficiary, let’s assume that 100 went to 150. I will argue the opposite for Airlines all travel is not going to come back, right even if things normalize and the pre COVID demand is 100, you will probably go back from 50 to maybe 85 -90. So, the 50 to 85-90 recovery is there. Even if you’re saying, asset-heavy airlines demand coming back, you need to be careful on where the last peak was versus where the next peak will be. My argument is that the next peak will be lower than the last one.

I was just seeking a meeting saying that this is what I like about you, I’ve been impressed, can we just meet? And you’ll be surprised. I mean, I had a great hit rate on asking for these meetings, and the number of people who said yes, come over, let’s chat. I don’t want to take anything out of it as a predetermined agenda. When you’re meeting somebody without an agenda, you kind of get to see that real person. If you’re meeting as an investor, you’re meeting a corporation, both of you are putting on a facade.

3. Should one reduce smallcap allocation in portfolio?

Benjamin Franklin had famously said there are only two things certain in life: death and taxes. So while we cannot look into the future and be sure, we can surely look at the past and be prepared. NIFTY smallcap index history reflects that it oscillates between bouts of unbridled optimism and illiquid disdain. It gained 95% between April 2016 to December 2017, followed by 67% (!) correction till March 2020, and a rally of ~220% over the last 17 months, significantly outperforming the broader NIFTY index (112%). In short:

What now? Read our note where we cover this topic from various lens:

We have shared a list of ‘Z category’ stocks to be avoided and companies where the promoters have been reducing stake and we would advise caution.

Phillip Capital’s note on Infrastructure EPC companies instills fresh optimism on Infra EPC and they believe the sector is “at the cusp of a big upcycle”, an encore of the 2014-15 period, when key EPC stocks delivered 80-800% in 15 months window. Their optimism stems from strong order-book (average 3.5x book-to-sales), strong new order inflows, pickup in execution, removal of stuck orders and comfortable balance sheets.

Bain released a detailed ‘How India Shops Online’ report which indicates that India’s online shopping landscape has changed significantly after the pandemic. The analysis notes that Social Commerce is expected to grow significantly in India with peer and community influence playing a much more significant role for the next wave of online shoppers. Celebrities giving way to micro-influencers.

The ratio of operating cash flow to market cap for S&P 500 index is near the lows of 2000. Given the importance of cash flow yield for reinvestment, things globally look slightly stretched.

World equities keep rising but consumer sentiments are weakening with Delta variant having an impact. This may not be the best comparison, as one of these series (consumer confidence) is rangebound, and the other is trending. At some point, they will naturally diverge anyway. But still, it is interesting to see stocks zigging while consumer confidence is zagging:

5. Good reads and other news:

That’s all for this week. Please share with your peers if you found this helpful and subscribe at multipie.co to start receiving these as a weekly digest every weekend!Have a great weekend!