Hello everyone! This week we discuss the market moves, what is driving up Borosil Renewables, how to protect yourself from consensus trades and some curated reads. Happy reading!

Also, Multipie app is now live and we have started rolling out invites to our waitlist members. If you have signed up, you would have either received an invite code already (check your mail please in case you missed) or will be getting one soon 🙂 If you haven’t, do join us by subscribing at multipie.co

Last week, again a little correction continued in the market. Almost all the sectors lost, again last week, especially, Energy and Power & Utilities which was down by 3.7% and 3.5% respectively. Commodities & Materials was the only sector which was merely up by 0.4%. 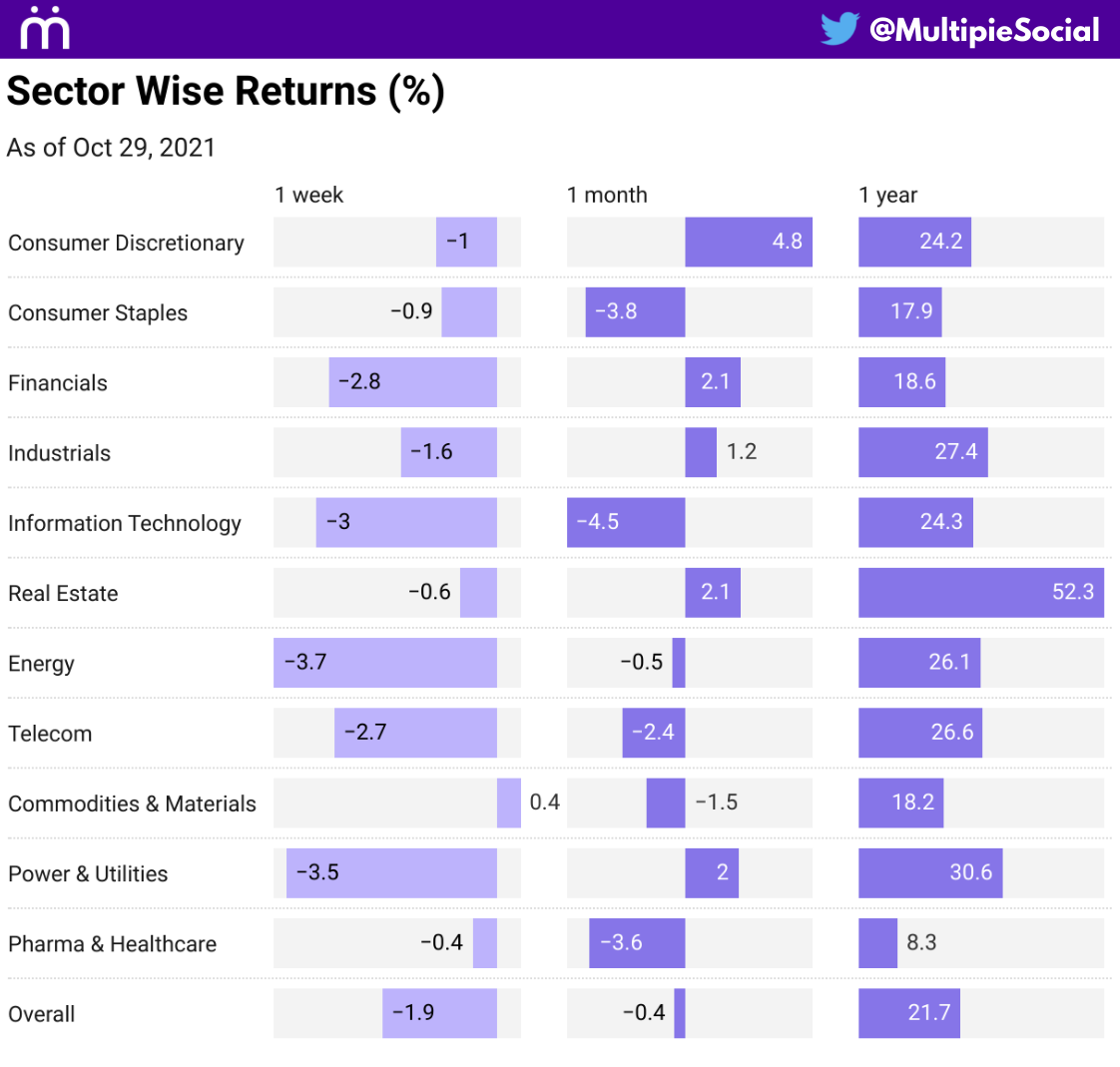 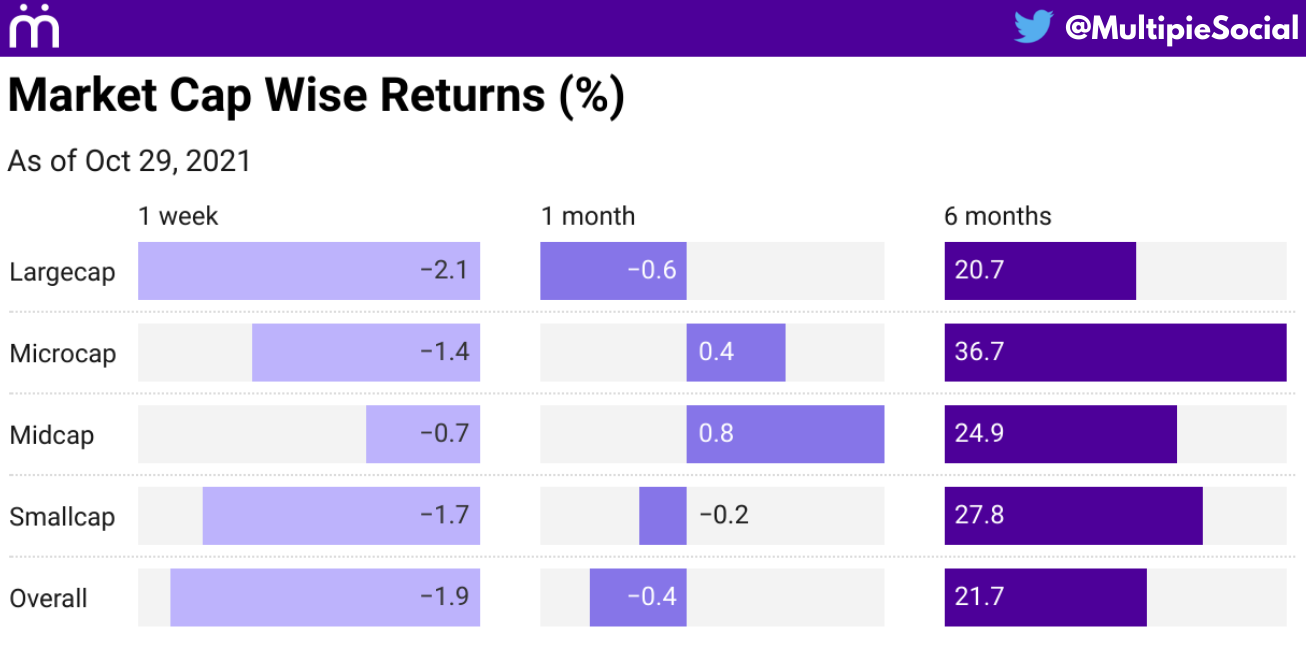 2. What is driving up Borosil Renewables?

Borosil Renewables Ltd is the only solar glass manufacturer in India. It has announced to more than double its current capacity i.e. to take it’s from 450 tonnes per day to 1000 tonnes per day. This is expected to increase the company’s sales by ~120% annually.

Why this sudden spike in capacity?

China supplies ~70% of the total solar panels/modules globally. As the world is facing power shortages and logistics issues, China is using its solar panel production for its own domestic use leading to global shortages and price hikes.

To reduce the dependence on China, international players are ramping up domestic manufacturing or looking for import alternatives. This is turning out to be in favour of India.

The surge in solar module (panel) demand is driving solar glass’s demand too and companies like Borosil Renewables are benefitting from this as they have been receiving high volume orders from countries like Turkey & Russia etc. (export sales have doubled this quarter) leading to better realizations.

Not just international dynamics, even in domestic markets PLI and ALMM schemes to achieve the government’s goal of 300MW solar installations by 2030 will motivate manufacturers to produce solar modules in India itself.

As this seems like a great opportunity, other companies like Asahi Glass & Gold plus have also announced plans to enter the solar glass segment. These players will cater to both incremental demand from international markets as well as domestic space (where ~70% solar glasses are still imported) leading to expansion in the industry.

3. Protecting yourself from consensus trades

In Ithought wealth’s video, Shyam Sekhar has brilliantly explained what consensus trade is and how it is important for retail investors to get out at the right time. Here are the key pointers from the same:

Consensus trading: Trading of those stocks which have a common perspective in everyone’s mind i.e. universe of “must own/must sell” stocks.

Many institutional fund managers are compelled to hold stocks from this must-own universe as they have the fear of missing out (FOMO) on the performance of these stocks.

Many times a few good fund managers try to act differently from the herd and avoid holding those common stocks. But in some cases when these stocks perform well, then these fund managers are held responsible for not taking up the opportunity.

Thereafter, they are forced to buy those stocks even at extremely high valuations due to  FOMO rather than due to strong conviction on the same. E.g: Reliance Industries or Alkyl Amines (Re-rating happened so few fund managers entered at high valuations).

Analyst’s role in a consensus trade:

Even if analysts are aware that any company in the “must own” universe is overvalued still don’t come up with the sell report. But after a point, someone breaks that consensus trade- it can be either promoter via recapitalising through QIP or it can be insiders like in GMM Pfaudler.

Usually, retail investors are not in this “breaking the consensus category” but ideally these trades can be very good indicators to take an exit. The key thing is not to be stuck as when the consensus trade has happened as once the correction happens, it will lead to wealth destruction.

4. Chart of the week 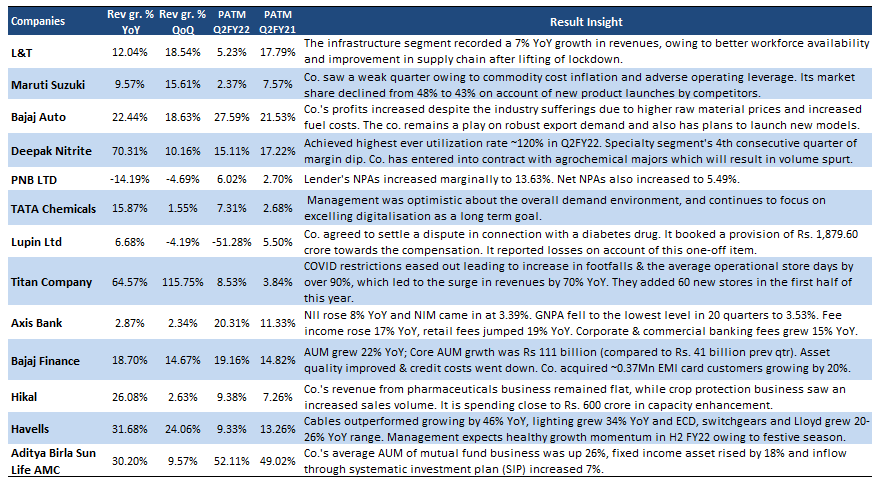 6.1 An article on the importance of understanding your game.

6.2 A good read on how few patterns help in generating investment ideas.

6.3 A thread on the journey of chairman of Pidilite Madhukar Parekh (son of The Fevicol Man)

6.4 A great thread on how financial shenanigans happen due to investors being obsessed with metrics like “ROE” instead of knowing a true picture

6.5 A write up on three acts of entrepreneurship that accelerated the Indian startup ecosystem.

7. Contributor of the week:

There are some great conversations happening on Multipie be it on intellectual investing or learning something new, you always engage and get some interesting insights.

This week we want to highlight one of the members as our “community contributor of the week”: Jensen (@jensenjjacob) for being actively interacting and sharing some excellent insights on our platform. 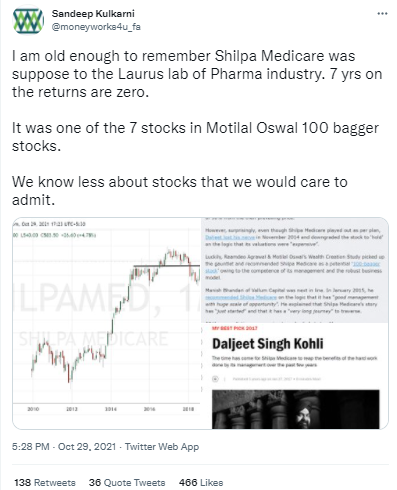