While the US Tech markets crumble, Indian IT was the top gainer last week at 3.5%. The strength was strong in midcap IT with Mastek, KPIT, Ramco Systems gaining over 10%. KPIT is the best performing IT stock over last month, gaining 45%. Abhishek had shared his reasons and thesis for investing in KPIT here.

Other sectors which gained are Industrials, Financials, and Metals/Materials by 2.1%, 1.3% and 1.1% respectively.

Whereas, pharma which was the only sector up last week lost the most this week i.e. by 1.5% followed by power/utilities & real estate which was down by 0.8% and 0.4%. 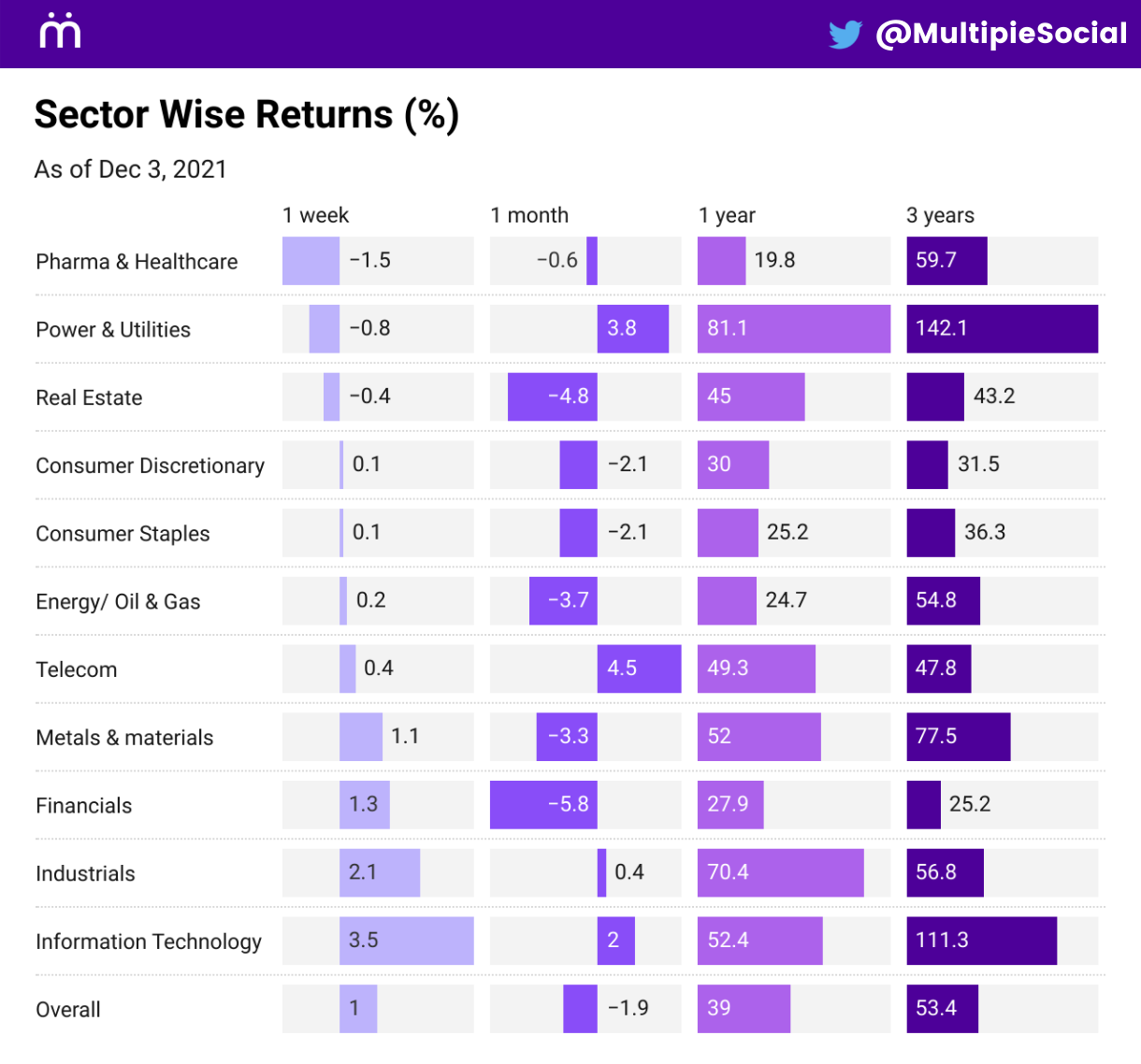 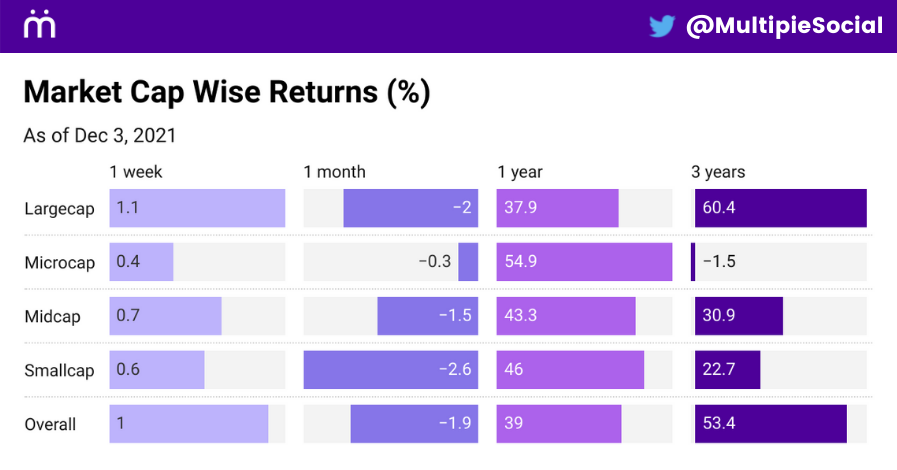 You must have seen sell reports, memes, jokes & in fact first buy report too this week by Dolat Capital on Paytm. After this, one might have thought it is one kind of a company but here the heading “Deja Vu” must have got you confused right?

Don’t worry, we will be sharing a different perspective on Paytm and before jumping to what and why is this happening, let’s check out some surprising pointers:

Alibaba and its subsidiary Ant group combined held 36.8% stake in the company (which had to be reduced to 25% during IPO according to SEBI regulations) compared to 14.6% stake of Vijay Shekhar Sharma.

In the interviews of Vijay Shekhar Sharma, he has indicated that Paytm’s focus will be towards providing financial instruments like Insurance, loans etc. rather than payments.

Similar strategy has been followed by Alipay for a while now, where it started with payments as its main offering, now it just contributes ~36% of total revenues.

4. Paytm launched its Paytm mall – to give it a mix of retail & transactions which is again similar to Alibaba’s business model.

After looking at the above pointers you might be thinking that there is something more than coincidence happening with Paytm. What if I tell you that it is actually Alibaba indirectly creating another similar fintech giant via Paytm in India like Alipay.

Alipay has been doing very well not just in terms of sales and users but in terms of profitability too (18% PAT margins in 2020).

But does this mean Paytm will also do well?

So one thing we can be sure of- “Management/Business owners know what they are doing” and might eventually create value once it starts providing services/products which will contribute to bottomline too.

Pricing power does not always mean sticking to your strategy in spite of competitors entering the market. What Page industries did is what we see playing out in the paints industry currently- misconception that Asian Paints is lacking incremental pricing power, but they might be on this strategy.

Same played out in Telecom on price cuts and now on tariff increase (We covered- how dynamics in telecom industry might be changing now here).

On 2nd december, the government announced that out of total 391 GW electricity generation capacity, 157 GW can be generated from nuclear or renewable energy. Government has given the target of installing 500GW of capacity from non-fossils till 2030. This will lead to energy transition in the industries such as power, automobiles and logistics/transportation.

We covered in our earlier newsletter The upcoming global opportunity in this space due to which Borosil Renewables Ltd and other companies in this space have announced large capex plans. You can read the same here. 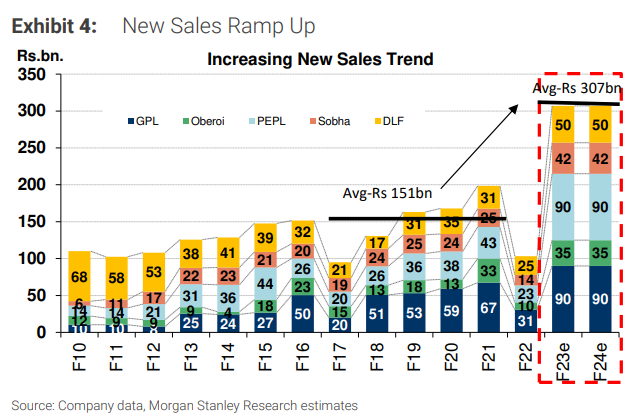 Real estate sales and new launches have been ramping up since 1-2 years majorly due to an increase in pent-up demand and low mortgage rates which is at ~6.7%, lowest since 2003. Morgan stanley has estimated that real estate sales will double to 307bn$ by FY24 compared to the current average of 150Bn$ in last 6 years.

Due to high demand, many developers like DLF, Godrej properties & Oberoi have taken price hikes due to which their profitability has increased and they have reduced the debt levels and the current net debt of the sector is at bottom level in the last 10 years.

Only 25% of the BSE200 stocks are currently trading at 52-week highs (vs. 73% in mid-October), suggesting broad-based correction.

6.1 An very interesting and insightful video by PPFAS on “Love China or Hate China, you cannot ignore China” and also brilliantly explained in the video the risks while investing in China.

6.2 A good primer on how to understand “Depreciation” while analysing financial statements of any company.

6.3  An excellent piece– “Lies, Damn Lies, and Investment Statistics” on how one needs to understand that investment statistics can distort reality.

6.4 An insightful thread on how one can reduce interest rate risk while investing in bonds/fixed income securities. 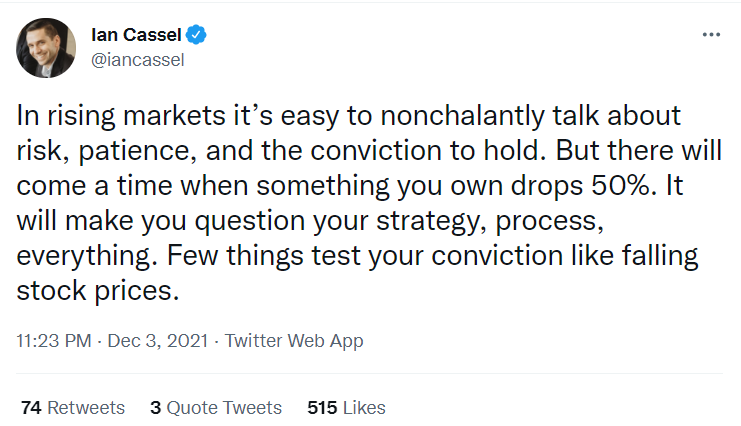